Of all the stories of writers who make it, my favourite is about Kate Atkinson. You know, how she wrote about the museum, and some cracking short stories and then turned all the expectation about the writing career she was going to have on its head by turning to crime fiction and inventing a detective.

As it happens Jackson Brodie was an afterthought, created to tie together the lives of some characters she was already exploring. This in itself is a brilliant example of how creativity springs from actually doing things, rather than waiting for ideas to arrive before you begin. So Kate moved easily from literary fiction into genre fiction (actually I’m not sure you’d be allowed to do it the other way around – the other name I can think of is Iain (M) Banks, but the Wasp Factory came first so it’s the same deal) and it’s been so successful the BBC had to get their hands on it. 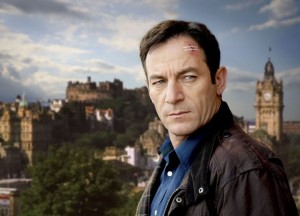 I suspect there’s been some handwringing around the country as ladies bemoan the choice of Jason Isaacs, of the ‘oh he’s not my Jackson Brodie’ kind, but I wasn’t one of them. There’ll have been some more handwringing about favourite bits of the books being left out and wotnot too, but I don’t really do that either. Books, tv, and movies are different beasts. They have different conventions, and comparisons are unfair. The fullest and best Jackson Brodie experience is found in the books (obviously), so if you’re going to moan, just read the books again and forget about the telly. If you want. Personally I’m not forgetting Mr Isaacs at all.

But what is it that makes Jackson such a compelling character? Here are five things that helped make us passionate about Mr Brodie:

Think of those characters that stay with you, the ones you’re convinced you could bump into if only you turned the right corner. My guess is that those characters are the ones loved the most by their creators, flaws and all. If you as the writer cannot love your creation, then how will anyone else? More importantly, how will you stay engaged with the writing over the course of thousands of words?