I finally got around to watching Shame at the weekend.

You’ll notice now that Michael Fassbender is everywhere, but if you’d wanted to know who would be the next big thing, you should have listened to my mate Will. A couple of years ago when trying to convey the essence of the protagonist of his novel Will told me I should think of Michael Fassbender. ‘Who?’ I asked.

We should probably gloss over that exchange. 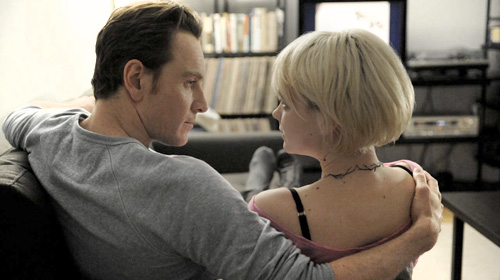 Shame is a British film, made by artist turned film maker Steve McQueen. Fassbender plays Brandon, who has a carefully planned and orchestrated life, constructed so that he can submit to his sex addiction without too much disturbance. His sister Sissy (played beautifully by Carey Mulligan) barges her way into his flat and his life for who knows how long, distorting his life and routines, and driving him crazy.

They are damaged by the same past (hinted at but never revealed), but have responded in different ways as adults. Brandon is on a knife edge, kept sane only by locking his feelings deep within himself, and losing himself in the meaningless physicality of sex without intimacy, without which he is a time bomb of anger. Sissy craves intimacy, hunts it down dramatically, gives herself to anyone immediately. Where Brandon rages, she weeps, but she has the advantage over him in being able to feel. Through the whole film she was the only one to sport anything of colour -a bright red hat, playfully transferred onto her brother’s head, a symbol that she could, in fact, help him heal, despite the damage they both suffer from.

She opens enough cracks for us to see what is going on behind his facade. The man is in despair, a prisoner of his addiction, his inability to form attachments. Brandon goes on one date with a co-worker, and you sense that he is actually enjoying himself, conversing, trying to connect, but is so unpractised at intimacy that he doesn’t even know how to kiss the woman goodnight. It is one of the saddest things I have seen on film.

When Shame came out, much was made of the sex and nudity it contains, because the natural response to sex and nudity on film is that it will be raunchy, rude or just plain pornographic. That this overshadows everything else is a shame in itself, because there is nothing remotely titillating about the sex in the film. It is all sadness and despair.

For several hours after watching I felt crushed by the experience, yet uplifted, because I’d been in the presence of artists who’d connected me to what it was like for this person to be living with this awful compulsion, that core of emptiness. As hard as it is to watch, it is so rewarding to see something that assumes I can think. In a way, McQueen reminds me of Terence Malick, and I’m full of anticipation for his next project (Twelve Years a Slave), which promises to be just as challenging.

Gird yourself and try to see it. To persuade you, here they both are talking about the film:

McQueen & Fassbender interviewed together on Shame and working together

(Warning: contains a little bit of a swear.)