A couple of weeks ago I finally took myself to the Globe. I stood as a groundling, rain jacket tucked under my arm, and waited for Jamie Parker to transport me the the fields of Agincourt. 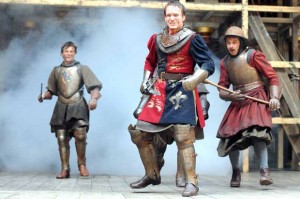 There is something magical about that theatre. I can’t for the life of me recall why I’ve never been, other than the idiocy of trying to book tickets with other people and not being able to co-ordinate diaries. Perhaps it was serendipitous that my first play there should be Henry V, with its mention of the Wooden O, so obviously the Globe itself when you’re standing in it, and the chorus who exhorts the audience to use their imaginations and project castles, armies, and battlefields onto the limited wooden stage. It’s a play of obvious conspiracy between audience and actors, which of course all theatre is, but all the more exciting when your actors can see you, interact with you, and incite you to follow him into battle (and all he had to do was ask and we would have gone, all of us).

Before that damp Friday evening I’d never seen the play. Never seen the Branagh film, never seen either of the Henry IV’s, and only had a vague idea of Prince Hal as a swaggering sort of fella. Richard II I know inside and out (A level text, plus a transformative performance by Derek Jacobi in Newcastle) so at least I had that on my side. But should you go and see a Shakespeare play if you don’t know it? What if you can’t follow what is going on? Isn’t the language a bit dense?

The misconception that Shakespeare is incoherent comes about because we first come across him at our school desks, wearing scratchy uniforms and dreaming of the boy with the curly hair three school years ahead, who is never going to look at you once let alone twice. You are told that Will is the greatest playwright ever, that his powers of language and storytelling surpass all others. You fight your way through the text, dry as dust on the page, wade through the York notes, with the teacher determined to wring every last inch of meaning from every word.

You stumble, you fall, you fail to undersand.

And this is not your fault.

Because you have to see it.

You have to live through it, the words lifted and given breath by talented actors. It’s their job to interpret for you, to bring feeling, humour and humanity. This is what Shakespeare was all about – he was an actor as well as a writer – and I’m sure he never imagined that anyone would be sitting reading his plays in silence. They were always an interaction for him. And if you have good enough interpreters then those 400 years between the writer and you just melt away, because, honestly, things haven’t changed that much.

Henry V has weather jokes. It has a turn on the Englishman, Irishman, Scotsman joke. It has a comedic and touching wooing scene. It has the biggest blunderbuss of all Shakespeare speeches. There are rude jokes (a smutty sense of humour has been part of our culture for centuries).  It has hopelessness on the eve of war, the spirit of the underdog, kingship, undertaken by a mere mortal.

English has changed, obviously. Our rhythms are different, we’ve dropped a pronoun (thou, equivalent to the French ‘tu’), added a few words, lost a few words, but it isn’t a million miles away. (If you want incoherence in your literature have a peep at Chaucer.) Feel what Shakespeare is telling us. Don’t worry about catching every last word, understanding exactly who is who. You don’t need to.

Pay your fiver and take part in the conspiracy.

(Henry V runs until the end of August, and you can still get tickets. And you should, if you can. It’s really very good.)