I’ve been writing more in the last couple of months than I have done in recent memory (although, to be fair, my memory is absolutely shot thanks to the joys of not sleeping properly for the last seven years so there could have been some really prolific months in there and I wouldn’t have a clue) but I still need a massive kick up the arse some days to drag my hands to the keyboard before everything else gets in the way.

Here, for instance, are the things I have lost time to today: preparing macaroni cheese for later, taking the car for a service, supermarket shopping, laundry, mopping up cat wee, watching videos of Tom Hiddleston dancing. All arguably fine and necessary pursuits, but not writing.

So it helps to have a couple of tricks up your sleeve to make yourself sit down. Doesn’t it? Yes, it does. 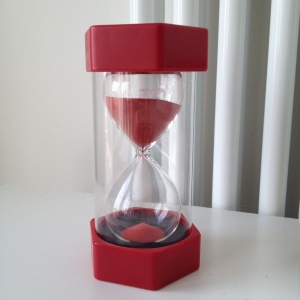 Yes, that picture is of my actual sand timer. I like the pomodoro technique, which advocates concentrating fully on one thing for 25 minutes, and then having a break. It’s a good thing to use when your brain has been fried by too much telly or time with a toddler, because it will encourage you to learn to concentrate again. (It’s a skill. It needs practice.)

Pomodoro devotees use a kitchen timer, or an app. I found out that I’m not a fan of ticking, so instead invested in this rather lovely 20 minute sandtimer. (Really, I wanted the yellow one from School of Life, because I’m easily marketed to, but the price! My god, the price!) The thing I like most of all about the sand timer is that there’s no audible way of telling that the time is up – if you’re really lost in something, you just carry on doing it.

No, not in a Mel Gibson sort of way (though if you have the urge to yell out in a bad Scottish accent, don’t let me be the one to stop you).

Freedom is a nifty piece of software that effectively locks you out of the internet for a time, the length of which is specified by you. I have the old version on my laptop, but it seems to work online now. I have no idea how.

Let me tell you, the first time I used it, I was a bit freaked out. “You mean, my laptop is now just a computer? I can’t look up new chairs on Ikea? I can’t look at twitter? What can it do then?” What it can do is just be a computer – let you input and store words in a word processing program. It’s so 1995.

Incidentally, my solution to things I want to research while I have freedom enabled is very old school – I write them down on a notepad, and look them up later.

The list of reasons not to is really really long.

This is my last, but most important, practical tip. You can go back to the beginning of this post and see the kind of things that I lose time to. In reality the list is longer, much longer. We all have a list like this.

If you ignore it for just twenty minutes, and do some writing, you will have so much more time to do everything else. This is partly because you’ll free your mind from thoughts like ‘I haven’t done any writing today’. Kill your resistance right at the beginning, and you’ll find you magically have more time for everything, including more writing.