The day before I was due to pack up the car and leave Hay, I went browsing in a little shop I love. I’ve been going in for years, and have bought lots of lovely things. I was very aware of the enormous rucksack on my back, and trying not to break things by spinning round too fast.

So instead I dropped a small ceramic pot and lid straight out of my hands, onto the floor, where the lid snapped cleanly, sharply in two. 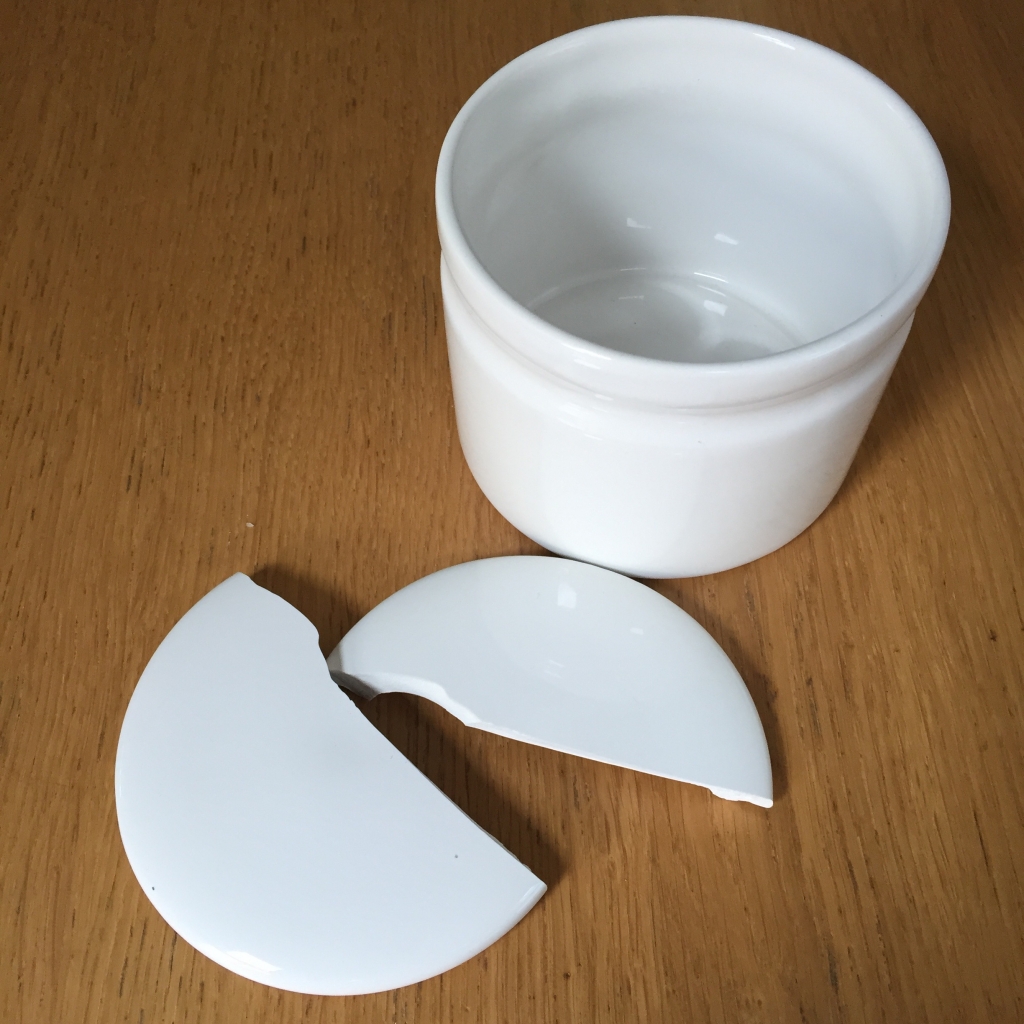 The nice shop man came up the stairs to see what had happened, and I promised to pay for it, and he said no problem, and I should still look around, and so I did. I had a little cry while I was at it, because of the shock I thought, but then I went down to pay, and started to weep. I cried so much that the nice shop man wondered if he should offer me a cwtch, and I paid, and he wrapped it up, and I continued to cry, and I took the bag from the shop and walked to a bench outside the library, and I continued to cry.

For half an hour.

For half a fucking hour.

I wept on a bench, with my broken thing in the bag next to me.

I’d say I’m not given to weeping but that’s a massive fib.

This was something else though. This last year has had its fair share of stresses, and my week away was something just for me; the other me that does the being, and noticing, and thinking. Not the me that does the laundry and the wiping and the paying of bills. I would be free of everything but myself for one week. I chose my events, I packed all the shoe types, I mistakenly wiped my playlists off my phone so the car journey wasn’t as fun as it could have been.

Anyway. Like one of those mystical things I don’t have much truck with, all the talks I went to, the books I was drawn to, the people I spoke to, the book I read daily (A.L.Kennedy, On Writing), everything and everyone seemed to be bringing me back to the same things: kindness, generosity, openness. Love.

Not one thing in isolation but all of those things at once. After a year of holding everything together so tightly, every day gave me another hint, a nudge that now was the time to let it go, and open up again.

Yes, I know how it sounds.

But I also know how it feels, and you can’t write anything worth reading while you’re bound up like a golf ball.

What am I writing for anyway? To step into the mind of another person, to transmit my idea of what it’s like to be a walking, breathing, feeling human directly into someone else’s mind. How do I do that? I pretend to be inside the mind of another, made-up person. I try to understand the things they do and why they do them, why some things matter, and others don’t, why, how and what it is like to love, or be rejected, to be lonely, to lose, to win, to survive. But why do I want to do it? Why make this effort? Because in doing that, if we do it well, we’ve said to our reader, “I’m here. I know what it’s like. We’re not alone.”

I’m fending off my own loneliness.

I’m fending off yours.

It’s what all art is an attempt to do. Send out little tendrils of pure human experience, hope that they touch someone else, and make that connection. We feel the same. We love the same. We hurt the same. It’s the best we have, however we feel driven to express it – words, pictures, song. Spending a week opening up that part of me that is capable of attempting this connection to all you other humans was bound to end in tears, if only because it reminded me how lonely it is when you stop trying.

And so I wept. I’d wept the day before over my book. I wept over broken things. I wept later on that same day at Amanda Palmer, singing about art. I wasn’t sad. I was less alone.

One thought on “Broken Things”